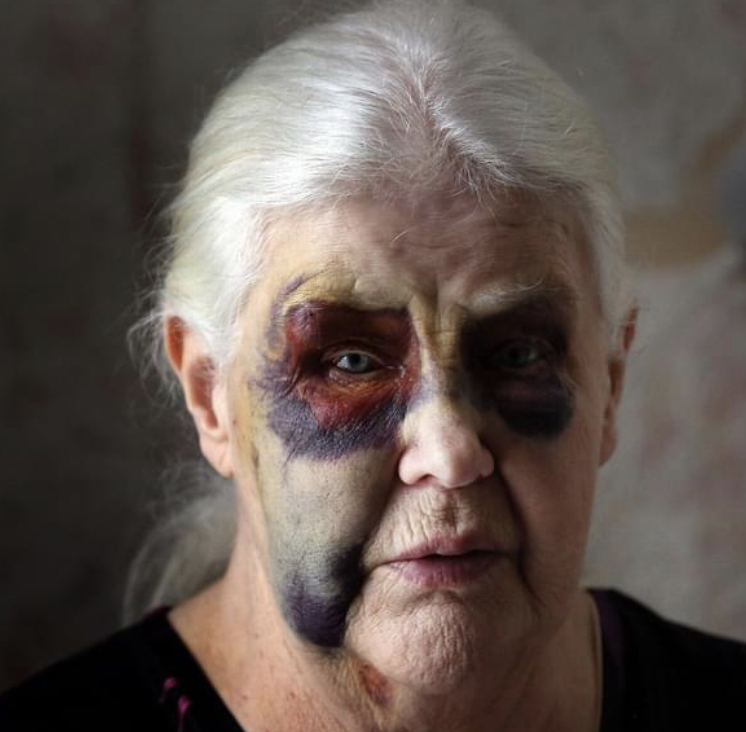 A cowardly pair of thugs dragged a defenceless pensioner’s face against a pebble-dashed wall as they tried to steal her mobility scooter.

Ida Brown was left battered and bruised during the botched robbery and she fears her attackers could go on to kill if they use similar violence again.

The 79-year-old, who is battling leukaemia and recently underwent a heart procedure, has bravely shown the horrific injuries she sustained following the attack at her home in Dunston, Gateshead, in the early hours of Sunday morning.

Her face is visibly bruised and she also suffered an injured knee, Chronicle Live reports.

As her attackers fled without the scooter they chillingly warned stricken Ida that they would return.

She said: “I’ve never been scared before, but now I’ve been told to keep my door locked.”

Admitting she’d like to “throttle” the thugs, she added: “They are rubbish in my mind.

“They wouldn’t dare pick on someone who would fight back. Elderly people are probably all they will pick on.”

Ida, who lives alone, spent around five hours in the A&E department of the Queen Elizabeth Hospital in Gateshead, following the attack.

She said she was awake at around 5.30 am when her large cat – called Henry VIII – was alerted by a noise outside.

“The cat always runs to the door when someone is there, and I could see movement through the window,” she said.

“I shouldn’t have opened the door, but I did. When I opened it I got a hell of a shock.”

That’s when the thugs yanked Ida’s arm, before carrying out the sickening attack which left her in a crumpled heap on the ground.

When they ran away, they were shouting “we will be back”,” she added.

“I got a shock, it was all over before I even realised what had happened.”

Ida said she believes they were after her £1,300 scooter, potentially to sell on for drug money but the vehicle was secure so they were forced to flee empty-handed.

Her ordeal has left experienced police officers sickened, as they do all they can bring the culprits to justice.

This is an abhorrent attack on a vulnerable pensioner in her own home and we are determined to find those responsible,” said Neighbourhood Inspector Alan Davison, of Northumbria Police.

“The mobility scooter would clearly belong to someone with a vulnerability and I find it appalling that anyone would try to take it away from someone in need.

“To then shove an elderly woman into a wall, and cause the level of injury that they have done, is beyond comprehension and I know the wider community will share our anger.”

Ida was unable to get a good look at her attackers because it was dark but she thinks they were either in their late teens, or early 20s.

She added that their accents were unmistakable “Geordie”.

And for the proud pensioner, the thought of someone stealing what belongs to her leaves her sick to her stomach.

I worked until I was 77 at a school,” added Ida, who had worked since leaving school aged 15.

“I did that so I could get a bit of money for when I did stop, and I resent it being stolen off me when I’ve worked for that all of my life.”

And with her assailants still at large, she – and Northumbria Police – hope somebody has some information on who they are, to get them off the streets and to ensure they can’t hurt anybody else.

“What worries me is that if it happened to someone else. Elderly people are not that strong,” added Ida, who had a heart pacer added less than three months ago.

If they hit (others) the way that I was, I think they could kill some people.”

In an emotional plea to the community, Inspector Davison has urged anybody who knows who is behind the attack to give them up.

“There will be people out there who know who is responsible and we would urge you to look at these pictures of Ida and ask whether you are happy for those responsible to evade justice.”