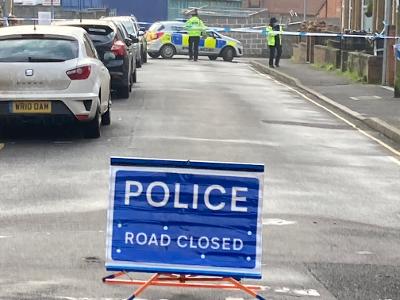 Manor Road, situated just behind Yeovil’s prestigious Manor Hotel this morning remains cordoned off by police as they continue to investigate a suspected murder scene in the quiet Somerset country town.

The street is known as Manor Road and is taped off at both ends with several officers making ‘door to door’ enquiries after what appears to have been a brutal bloodied battle that took place last night at around 10 PM when locals called the Avon & Somerset police.

Police it’s reported by eyewitnesses raced to the scene in large numbers to find at least one dead and others injured.

Whilst the deceased believed to be of Polish nationality was removed from the small narrow street in a body bag others were attended by emergency services before being taken away for questioning – including the air ambulance.

According to a police officer at the scene, the small road will remain cordoned off whilst forensic officers will carry out their investigations further into the battle and death.

Crowds are starting to gather at the scene of the crime horrified and shocked by yet another murder int the normally quiet sleepy Somerset town.

Only just before Christmas the town saw a nearby murder of a security guard.

Local dog walker Penny though says she’s not surprised at all and believes its drug-related, Penny who lives nearby told Global247news “It’s going to be a battle over drugs, the house on the corner is well known for it, we see the police attending their numerous times, the dead person seems to be the large overweight Polish guy and I’m sure the police have been there to his house, the second one in after a previous attack on him

” Whilst the majority of locals around here are nice and pleasant, that part of Manor Road is well associated with drug dealing, especially the end house, there are constant people pulling up and going from there and none of them work” she claimed.

Police are currently awaiting the forensic teams to arrive from Bristol to examine the scene whilst officers ensure the area is cordoned off and the house of the unfolding incident remains emptied of occupants with its front door and windows wide open.

Access to Manor Road is expected to be closed off for at least the remainder of the day whilst its reported persons have been detained and assisting police with their enquiries.