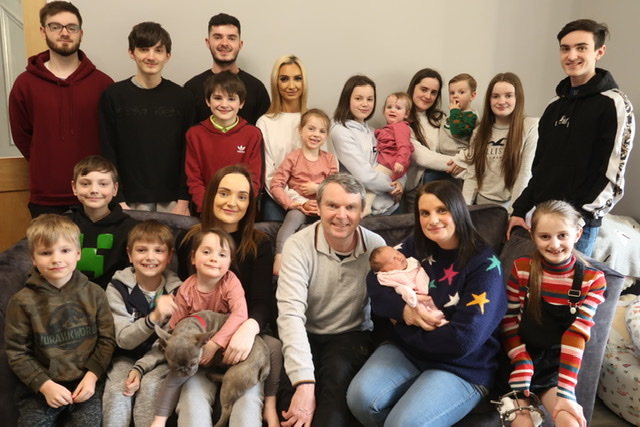 LIFE is certainly not cheap when you have 22 kids – but spare a thought for Sue and Noel Radford who fork out £400 a WEEK on groceries.

The busy family lifted the lid on their hectic life in lockdown for their new Channel 5 Show 22 Kids and Counting, which aired tonight as the start of a four-part series.

Sue revealed that the weekly food bill has nearly doubled in lockdown as the children are constantly eating – and their food bill has risen from £300 to £400.

The Radfords use 16 pints of milk and four loaves of bread a day, and each week they go through 80 yoghurts, three tubes of toothpaste and 24 toilet rolls.

And if sausages are on the menu that evening, Sue will need to ensure she puts a staggering 56 under the grill.

When you’ve already had 21 babies, you’d think that the novelty of the first scan would have worn off – but for Sue, hearing her daughter Heidie’s heartbeat is still a “magical” experience.

While filming their new show during the lockdown, 45-year-old Sue – who has been pregnant for over 16-and-a-half YEARS – welcomed her 11th daughter with husband Noel.

Sue said: “That first scan is always very exciting. That moment where you get to see the little heartbeat flickering away.

“It’s magical. And it doesn’t matter if you’ve had one pregnancy or 22.”

Describing how her shortest labour was just 45 minutes and her longest 36 hours, Sue added: “So many people always ask, ‘does it get any easier?’ No!”

Before welcoming Heidie in April 2020, Sue and Noel, from Morecambe, Lancashire, had already spent over £1 MILLION raising their bumper brood.

Reflecting on this eye-watering figure, Noel said: “I try not to think too much about what it costs. What could I have had instead?

“A nice flash car. A Porsche on the driveway.”

Meanwhile, Sue joked: “We could have been living in a mansion!”

Instead, the couple – who support themselves with a bakery and don’t rely on benefits – have squeezed their large brood into a 10-bed former care home.

After meeting his baby sister for the first time, 13-year-old Josh said he hoped his parents would stick to their word and not have any more children.

He joked: “I feel like we’re running out of actual rooms in the house. She’s got to stop eventually, right?”

With 18 of their children still living at home, Noel is under pressure to provide for his enormous family through his pie shop business.