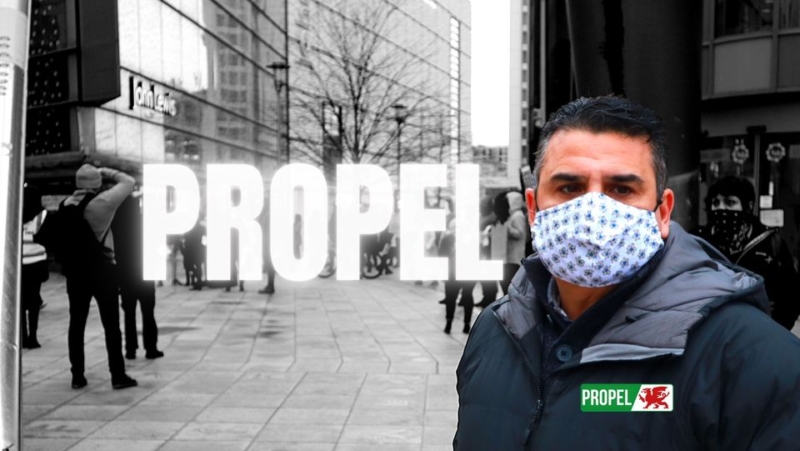 In astonishing scenes on Sunday evening, the South Wales Police turned up at the home front door of Welsh politician Neil McEvoy to follow up a complaint he had been out delivering leaflets and breaking Covid lockdown regulations.

The Welsh politician filmed the police visit and quite correctly pointed out that the Welsh Leader Mark Drakeford was doing exactly the same although paying a private company to do so, with pizza menus.

He captured all the action on video as he took the cops to task and also highlighted that the Police had also been out delivering leaflets in the Bridgend region. He also pointed out to the overzealous Welsh cops that South Wales Police had tweeted of their leaflet dropping actions – something the two cops were unaware of.

McEvoy, who is known in Wales for his political stances against the establishment – often banned from the Assembly for doing so, challenged the cops to go to the Welsh leaders home and challenge him too, before the police issued McEvoy with a caution.

McEvoy later presented the video footage on his social media channels and said:

“Getting ridiculous now. Got the police turning up at my house on a Sunday night because election leaflets have been delivered in Cardiff, less than 3 months before an election. The officer claimed he’d “cautioned” me and read me my rights, despite me having admitted no offence and not accepting any caution. What’s truly astonishing is the exact same police force was out leafleting on the exact same day, which they proudly tweeted about.
So police leaflets fine. Fast food leaflets fine. All manner of junk mail – fine. Paying some private company to deliver leaflets – fine. But if my election leaflets are delivered by volunteers, when people are choosing the future direction of our country, the police are at my door. What they’re doing is taking away a level playing field and making it so that only rich parties can compete.
I used to look with concern at police harassment of politicians in other countries. Never thought it could happen here. Now it’s taking place on my own doorstep.”
What appears to be one rule for one and one for another in South Wales, brought massive support from Welsh residents for the clearly singled out Cardiff politician as over 10,000 residents pledged their support.
South Wales Police have yet to advise if they took the same action upon the Welsh leader Mark Drakeford whose family are well known to the police as the leader’s son is currently serving time in jail for rape.