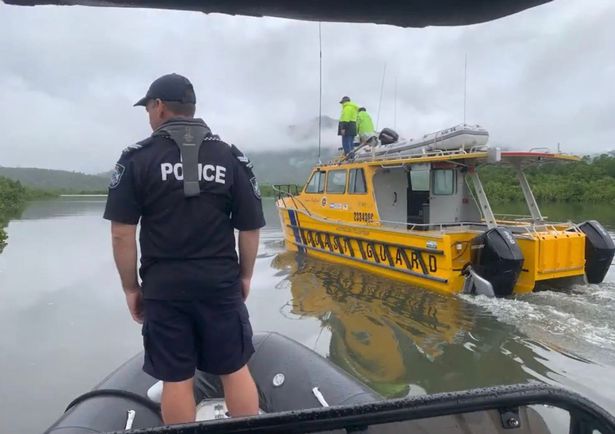 A missing fisherman is feared to have been eaten alive after human remains were found inside one crocodile with investigators now analysing a second reptile.

Police said the 69-year-old was last seen at about 3 pm on Thursday in central Queensland.

Days later, a 4.2-metre long crocodile was caught near the missing man’s upturned boat and was euthanised near Hinchinbrook Island.

Inside the animal, specialists made a grim discovery and found human remains.

Now a second crocodile said to have been between 2.7m and 3m long, has also been caught and killed.

It has been reported that the creature was euthanised after it was seen with possible human remains in its mouth.

Wildlife officers thought it “highly likely” one of the reptiles played a part in Mr Heard’s disappearance after discovering the beast near his empty boat, the Brisbane Times said.

Tests to determine whether the second animal contains human remains are still underway, police were reported to have said, and the results will be passed to the coroner.

Writing on Facebook after the disappearance and his suspected death, the Cairns Cruising Yacht Squadron paid tribute to Mr Heard and said: “Rest in peace.

“A beloved life member and all-round legendary bloke. Flags at half-mast for you mate.

“He died doing what he loves best, with the woman he loved the most.”

Fellow sailing group Big Mamma Sailing also paid tribute and said: “All our lives have been turned upside down by the loss of a great yachty mate, Andy in a Crocodile incident.

“We are so glad that we are here- currently by the side & supporting Erica, Andy’s partner and looking after their beautiful yacht, Shiraz, which we will assist to get back to Cairns- once Erica is ready.

“We sincerely send our love and strength to everyone that knew Andy, especially his family & friends.