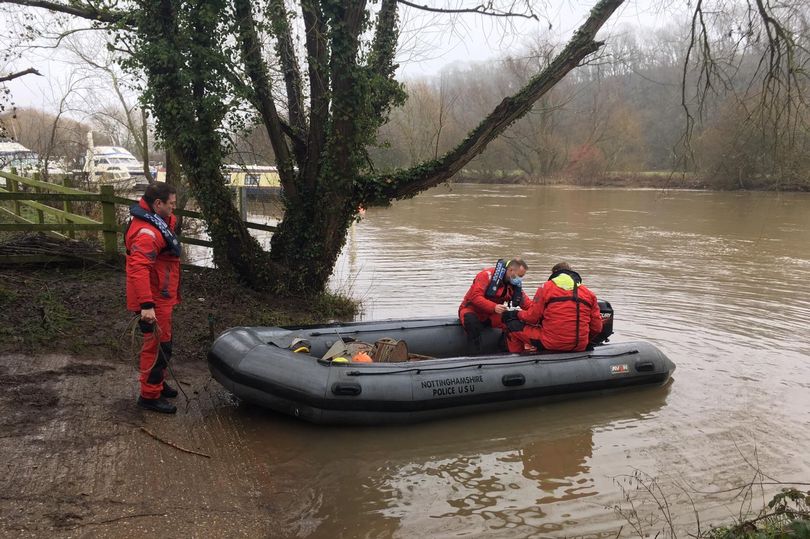 Two bodies have been found by police nearly a fortnight after a car was seen floating on a river in Nottinghamshire.

Searches have been carried out on the River Trent since the car entered the water at Hoveringham on the afternoon of Monday, February 1.

The car was located by sonar on the riverbed days later but had not been accessible because of the fast flow of water caused by flooding.

A specialist police dive team entered the water at around 10.30 am on Saturday, February 13, and were able to remove the bodies of a man and a woman, Nottinghamshire Live reports.

No formal identification has yet taken place but the family of the missing people have been informed by a family liaison officer.

Work, which is being supported by a tug boat from Newark, is also underway to remove the car, which was located last week by a sonar device supplied by the North West Underwater Police Search Team.

Inspector Tim Ringer, leading the recovery operation, said: “This has been a difficult and complex operation involving dozens of people from multiple agencies.

“Underwater recoveries of this nature are always very challenging, but our divers’ work has been further complicated by the very fast flowing water at the site.

“It was simply not safe to attempt this work before today.

“Shortly after 10.30 am this morning were able to enter the water and – as expected – discovered two bodies inside the vehicle. In line with previously agreed plans, these were taken to the opposite bank and driven away for formal identification.

“Our thoughts remain with the family of the deceased, who have asked for their privacy to be respected at what I know is an immensely difficult time.”

It comes after a large emergency services search and rescue operation was launched following reports at 4.13 pm on Monday, February 1, that a car had left Hoveringham Road and gone into the river.

Witnesses reported seeing two occupants inside. While no formal identification has taken place, police believe they know who they are and their relatives are being supported by trained officers while enquiries continue to understand the full circumstances of the incident.

A file will now be prepared for the coroner.