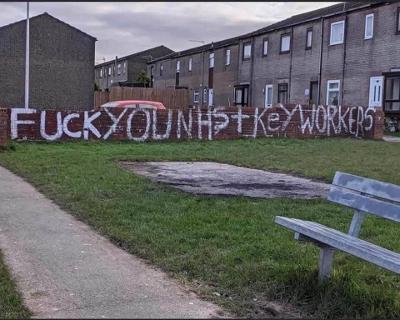 NHS workers in South Wales have been disrespected by graffiti yobs

Appalling graffiti appeared scrawled across a wall on a council estate in Sarn near Bridgend with obscenities towards NHS workers.

The graffiti that once saluted the workers, was dubbed over by yobs and has caused outrage through the normally proud nation.

Yobs decided to alter the wording of the message and now are being sought and hunted down by upset residents in Sarn.

“We will catch these yobs and string them up, they are a disgrace and need ‘sorting out’ – where on earth was the mentality in this?” questioned local Mike Davies.

NHS workers themselves operating out of an overrun hospital in Bridgend were appalled upon seeing the vile graffiti.

Nurse, Nicola Evans, currently working 15-hour shifts on times, told Global247news of how she saw the message and found it demoralising and upsetting,

“I was in tears when I saw it, I’m emotional and tired as it is, it was the last thing I needed to see right now, we are busting our guts to try and save lives and we have to put up with this! – hopefully, it’s just the thoughts and actions of the minority but I bet they wouldn’t be doing this if they caught COVID” she stormed.