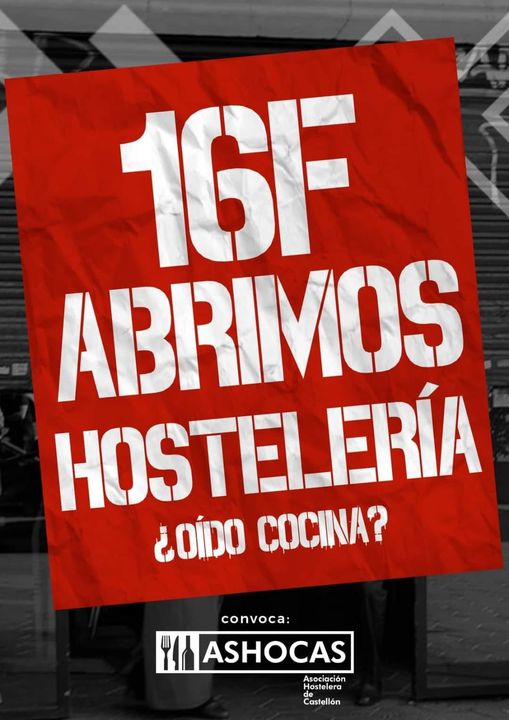 Restaurant and bar owners, as well as others involved in Spain’s hospitality industry, are set to ‘kick-off’ a defiant campaign on Spain’s Costa Blanca

Campaigners are urging all restaurants and bars to open sticking two fingers up to the law which states they should be closed.

With the industry decimated by harsh Spanish regulations that many feels are unfair and a complete restriction on trade, momentum for the campaign is gathering fast.

Campaigners have launched their appeal to owners across social media as they say:

“OPEN UP YOUR BARS SHOPS AND BUSINESSES AND STICK TWO FINGERS UP TO YOUR GOVERNMENT.
The time has run out, on 16th February the businesses of Valencia that have been closed down by the Valencian government WILL OPEN their doors and go against government policy.
This will be a massive revolt against the policy of Valencian president Ximo Puig as people, business leaders and business owners say enough is enough.
Our patience has reached this point, we cannot go on any longer, there is not a single reason why the Generalitat Valenciana led by Ximo Puig Ferrer keep us closed for one more day. After 20 days with the cessation of our business activity and after more than 11 months being the most restrictive community in the country, we continue to lead the infections. We cannot continue to pay for your incompetence. The best help is that they let us work. Next Tuesday, February 16, the hospitality industry of the province will lift the blind. The bars are back.”
The stinging attack on Spanish governing officials has the full support of thousands upon thousands across both Costa Blanca and the rest of Spain. and will be waiting on to see how the police react as all the bars and restaurants open up against the law.
Mick Duke, an ex-pat who himself recently closed his establishment permanently in Murcia, feeling he was run out of business by the Spanish authorities told Global247news how he’s delighted to see the stance.
Mick said: “Good on them and good luck to them all, they need to stand tight together in mass and defy the law, many of us have already been financial casualties of the Spanish powerbrokers who really don’t give two hoots about the hospitality industry – truth be told they don’t care if businesses go bust, they know in time they will be replaced, whilst others suffer severe financial hardship”
Debbie Wyatt, says how she can’t wait to see them stick up for themselves against the brutal Spanish regime, she tells; “This could be amazing giving the authorities the run around for once, they fully deserve it – I have friends who have lost everything, some suicidal and this can’t go on any longer, I hope it really kicks off well”
Meanwhile, another campaign is also set for everyone to protest, whether in business or not.
Mikey Burgess in Spain’s Benidorm announced and promoted
“On Saturday 13th at 11 am all pots and pans and spoons are removed from the cupboards to ram them en masse against all measures.
This is an action against the government.
Throughout Spain, this action will be in front of the town hall, including in Benidorm.”
The smashing of pots and pans is a long-standing tradition in Spain of when the people have an anti stance against its own government and Saturday could be full of a lot of noise come Saturday when the uprising of the people starts.
Although the real ‘action’ is anticipated on  Tues 13th when the establishments open against the law.
” The police won’t like it and we all know how the Spanish police behave but they will be outnumbered as everyone opens up, we have to stand up for ourselves as this has gone on long enough,” said campaign supporter Hazel Dean.