Feb 11, 2021 “From what I’ve heard, there may have been friction caused by the pressure of lockdown. It’s really sad to think a woman has died.” 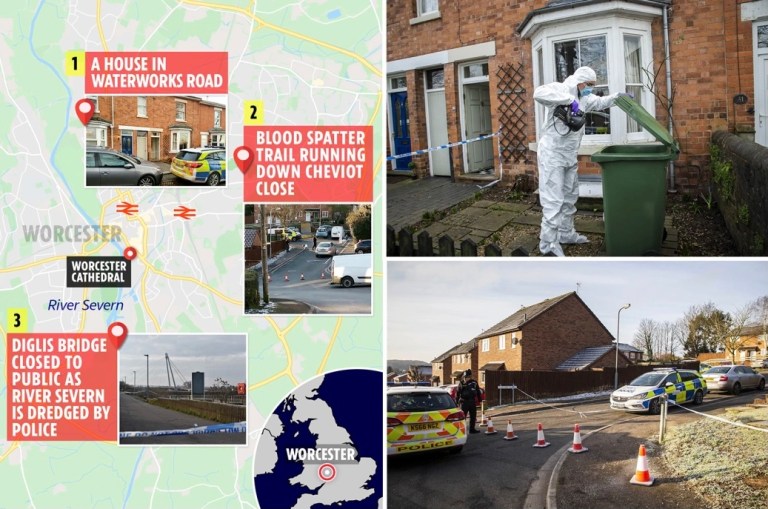 A 24-year-old man was arrested as cops traced a bloody trail in Worcester.

A source told the Worcester News that a man had allegedly killed a woman and then hidden her body.

Detective Chief Inspector Dean Jones said: “Unfortunately, we have located the body of a woman in her 20s in the River Severn during our searches last night.

“The family have been informed, but formal identification has not yet taken place.

“A 24-year-old man was arrested yesterday and remains in police custody, this is an isolated incident and I can confirm that we are not looking for anybody else in connection with the incident.”

Cops are also searching a house in Waterworks Road, while forensic experts have found what appeared to be blood spatters in a trail running down Cheviot Close two miles away.

A third scene at Diglis Bridge was cordoned off but has now been opened.

Residents living near the house being searched in connection with the murder have expressed their shock at her death.

Forensic experts were seen searching the bins near the house on Waterworks Road.

Neighbours said a woman lived at the property with her adult son who had autism and a lodger.

One said: “The police did knock on my door yesterday to ask me but when I asked for details they said they couldn’t say anything.

“There was a woman who lived there with two sons and one was autistic.”

Another neighbour said: “I don’t know the woman’s name but I’m sure she lived there with a lodger.

“The first I knew something was wrong was when I saw lots of police on the street on Wednesday afternoon.

“It’s a pretty shocking sight because this is a nice area and nothing as dramatic happens around here.“From what I’ve heard, there may have been friction caused by the pressure of lockdown. It’s really sad to think a woman has died.”