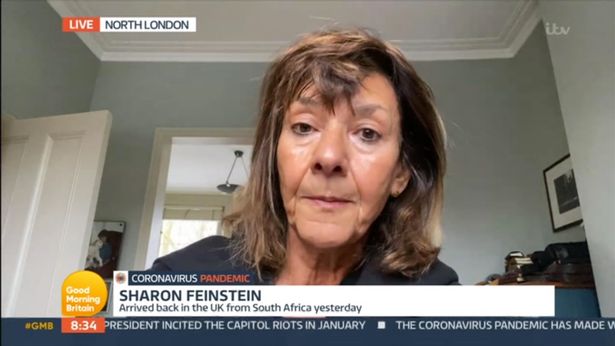 A passenger returning from South Africa has labelled Britain’s Covid border checks a “disgrace” after claiming to have passed through Heathrow unchallenged.

Sharon Feinstein says she breezed through the airport in just 10 minutes when officials failed to ask for her virus documents – despite her having them out and ready to show.

She had been to Johannesburg, where a mutant strain is running rife, to visit her mother and says she had received a negative test result before coming home.

But writer and journalist Sharon has hit out after claiming nobody bothered to ask to see her forms after she landed, just 20 hours after she had taken off from South Africa.

The troubling news comes as it emerged travellers are going to be tested a few days after they land in Britain, or face a £500 fine if you don’t have the correct information.

The Government is also expected to announce that people quarantining after returning from abroad will be tested on day two and day eight of their isolation.

Sharon, from Islington, north London, told the Daily Express: “I was in tears.

“I just couldn’t believe what happened. I could have had Covid, they don’t know where I am staying, they didn’t ask.

Sharon flew via Doha in Qatar after British Airways offered her connecting flights on Qatar Airways.

She was then was ushered towards Heathrow Terminal 5’s e-gates after landing yesterday lunchtime.

Sharon claims Border Force officials did not ask to see any of her forms and, after scanning her passport, she left.

She said: “I had everything ready, the certificate showing I had tested negative for Covid, filled in my passenger locator form, I had the entry and exit permits from South Africa.

“No one asked for my Covid certificate. I didn’t see anyone. I even looked for someone.

“The mutant variant in South Africa is rife. You can’t believe how many people have it there and are really ill.

“People should have tests after five days and again after 14. That is what happened when I arrived in South Africa.

“They were incredibly scared of the British strain of the virus. Why can a third-world country get it right and we can’t?”

Matt Hancock, the health secretary, confirmed this afternoon that the Government was looking into Sharon’s situation.

He said: “The Home Secretary is looking into this individual case.”

Around 147 cases of the South African variant have so far been identified in Britain – but experts warn they are likely to be the tip of the iceberg.

A ‘red list’ of 33 high-risk countries has been compiled by officials including most of South America, southern Africa and Portugal, all of which have new Covid variants.