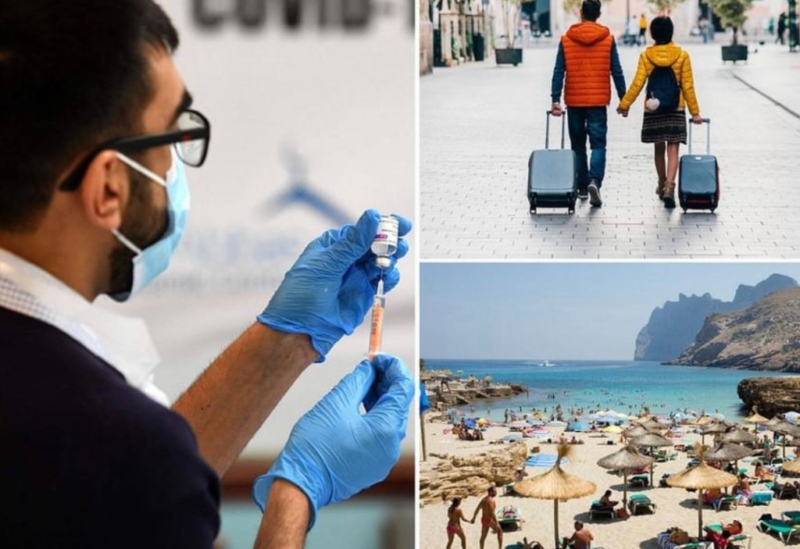 Brits could be charged up to £30 for a vaccine passports for foreign holidays, as a travel expert describes the documents as “inevitable”.

Popular holiday hotspots such as Greece and Spain have revealed plans to allow tourists to skip quarantine if they can prove they have had the jab.

Vaccine minister Nadhim Zahawi yesterday said the UK is not looking at introducing vaccine passports, saying it would be “discriminatory”.

He suggested people would ask their GP to provide proof of their jab if required by other countries ahead of any future visit.

However, doctors are able to charge a fee for writing vaccine certificates, as it falls outside their contractually agreed NHS duties.

GP practices are able to set their own fees, ranging from £15 to £30, as reported by the Daily Mail.

Asked if the UK is looking at introducing vaccine passports, Mr Zahawi told Sky News’ Sophy Ridge On Sunday: “No we’re not. We have, as of yesterday, given the first dose to 11.5 million people and what they get is a card from the NHS with their name on it, the date they’ve been vaccinated with the first dose and the date for their second dose.

One, we don’t know the impact of the vaccines on transmission, two, it’d be discriminatory. I think the right thing to do is make sure people come forward and be vaccinated because they want to rather than it being made in some way mandatory through a passport.

If other countries require some form of proof then you can ask your GP – your GP will hold the record – and that will then be able to be used as your proof that you’ve had the vaccine.

“We’re not planning to have a passport in the UK.”

He added: “There are small start-up technology companies that have had some funding from UKRI (UK Research and Innovation) and Innovate UK who are looking at apps in this area, but we’re certainly not looking to introduce it as part of the vaccine deployment programme.”

Aviation expert Alex Macheras says vaccine passports are “inevitable and we should prepare for it”.

Speaking on Good Morning Britain, Mr Macheras added to the growing chorus of discontent at Britain’s quarantine measures, which he said were “too little, too late.”

He added: “No one can get their heads around it, people still fly in.”

Customers of the airline would be able to record proof they have received the jab on the digital pass as well as Covid test results, to display while travelling.

British pilot union BALPA’s general secretary Brian Strutton said: “People are desperate to get travelling again, and if a vaccine passport is what is needed, then we fully support it.

“What would be better still is a globally-recognised vaccine passport. Many actors are working on their own version but we need a global solution to this global problem.”

The British Medical Association’s GP committee expressed the fear that dropping the responsibility for writing vaccine certificates on GPs would create more work for an already stretched public service.

Dr Richard Vautrey, chairman of the BMA GP committee, told the Daily Mail: “Practices are working flat out successfully delivering the Covid vaccination programme while continuing to provide non-Covid care to many other patients.

“To prioritise this vital work, we need a reduction in bureaucracy and admin tasks.”

He added: “It would far better if all patients had easy access to their vaccination history electronically so that they are able to provide evidence of this without needing to request a letter from their surgery.”

Vaccines need to be rolled out and there has to be a quarantine system that works so there is time to determine what is happening with any new variants, he said.

No10 currently insists there are “no plans” to introduce vaccine passports.