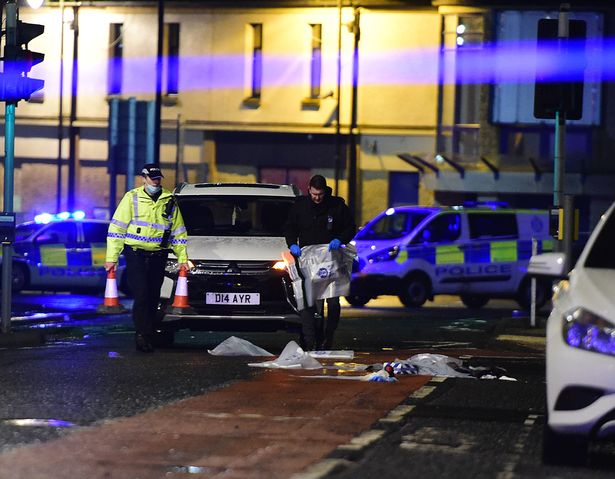 Armed police were called to the Crosshouse Hospital in Kilmarnock, Scotland, where officers said one of three “potentially linked” incidents occurred on Thursday evening

Two hospital staff are reported to have been stabbed in a shocking knife attack in Scotland last night.

The Crosshouse Hospital in Kilmarnock was locked down as dozens of emergency service vehicles were called to a “serious incident”. It’s one of three “serious incidents” in the town that are thought to be linked, police say.

NHS Ayrshire and Arran have since said the lockdown was lifted after roughly three hours.

The extent of the victim’s injuries is not known.

Police Scotland said the incident at the hospital is one of three “potentially linked” incidents officers are dealing with.

The force said: “The first occurred around 7.45 pm outside Crosshouse Hospital, the second around 20 minutes later on Portland Street, and the third, a serious road crash, on the A76, around 8.30 pm.”

They are not thought to be terror-related.

Ambulances have been diverted away from the hospital, with witnesses claiming two workers were attacked.

It is not currently known whether anyone has been detained in connection with the alleged attack.

An eyewitness told the Daily Record: “I was picking someone up when a member of medical staff was stabbed. The whole place is on lockdown.

“Armed police are there and they’re sending everyone away from the area.”

In a statement, the force said officers were called to three incidents in the Ayrshire town which are believed to be connected.

Police Scotland said in a statement: “We can confirm the ongoing incidents in the Kilmarnock area are not being treated as terrorist-related.

“Enquiries into these incidents are at an early stage and these areas have been cordoned off at this time.

“There is no cause for concern for the wider community.”

The public was earlier asked to avoid the area.

First Minister Nicola Sturgeon tweeted: “My thoughts are with those involved in these very serious incidents in Crosshouse/Kilmarnock.

“Please help @AyrshirePolice do their job by following the advice to stay away from the areas affected.”