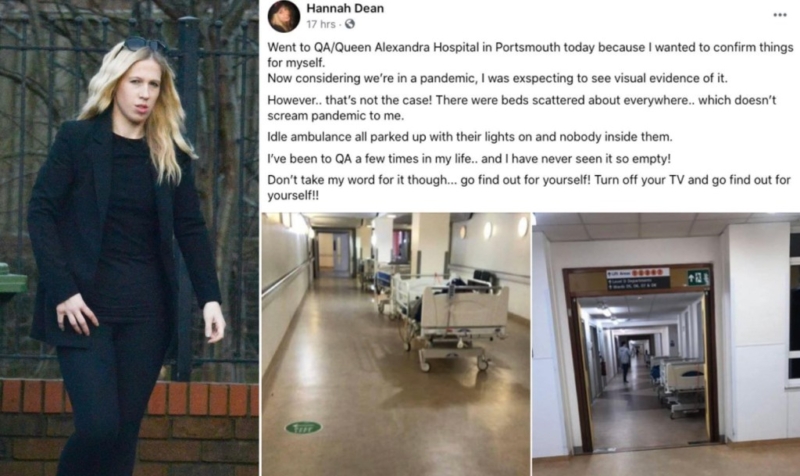 A ‘disgraceful’ mother-of-two who posted photos of empty wards and claimed coronavirus was a hoax has today been banned from visiting all hospitals.

Hannah Dean pretended to be a journalist to gain entry to hospitals before sharing photos on social media of wards which were not on the frontline in the fight against the virus.

Despite being fined £200, the 30-year-old continued to go back into hospitals to take videos and pictures.

She was caught filming patients in a ward on Sunday and now faces arrest and possible criminal prosecution if she ignores an Asbo-style community protection notice.

Nurses have since slammed the ‘insulting’ hoaxer, with one saying: ‘It would be a good idea to invite her to a tour in a Covid ward without any PPE.’

Another nurse, based in Bournemouth, added: ‘If only she worked my shift last night then she wouldn’t be filming in hospitals.’

Police last night confirmed Dean can only visit a hospital in an emergency, for a booked appointment or if she is a dependent of a patient.

Fines of up to £2,500 could be issued by the courts if she is convicted of breaching the notice and she is also banned from encouraging others to flout national coronavirus lockdown restrictions.

A senior police officer branded her actions ‘unacceptable’ while a local council leader said her comments were a ‘disgrace’.

Dean was previously handed a £200 fixed penalty notice for posting videos from the Queen Alexandra Hospital in Portsmouth, Hampshire.

On Saturday, Dean wandered around the corridors of the Royal Bournemouth Hospital for more than 11 minutes before she was stopped by a nurse and thrown out by security staff.

The following day she tried to film patients and staff at Queen Alexandra Hospital, where 744 people have died from Covid.

She later uploaded the video onto social media.

A spokesman for the Royal Bournemouth Hospital said: ‘We believe that this is a huge insult, not just to our staff who are working so tirelessly in the most demanding of circumstances, with many more Covid patients this month than ever before, but also to our patients and their families.