Feb 4, 2021 Deaf and autistic boy 3 is forced to prove his disability in Poundland 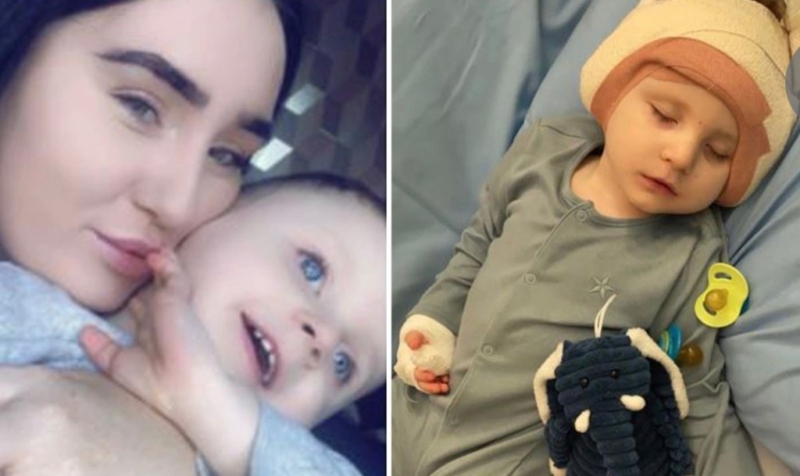 A LITTLE boy was left in tears after his mum removed his hat to prove he was deaf during a row over face coverings in Poundland.

Chantelle Johnson’s son Noah, 3, was born deaf and suffers from brain damage as well as autism – and therefore his mum is exempt from wearing a face mask because the tot needs to lip read.

The 22-year-old entered Poundland on Stockton High Street on Friday with Noah to buy some Calpol, along with her four-year-old son Hugo and mum Donna McCoy.

prove they were exempt from wearing a face mask – which they didn’t have.

Chantelle, from Norton, said she felt “embarrassed” and forced to take Noah’s hat off to show the worker his cochlear implants

She said: “I feel she didn’t believe what I was saying. People were staring – it’s just embarrassing and awkward.

“You can tell there’s something wrong with him.

“He’s been deaf since he was born. He’s got brain damage which caused him a hearing loss.

“He wears a hat to go over his implants and he’s got autism.

“He just cried when I took off his hat and he pulled out his implant. He’s only three, he’s fully disabled.

“He wasn’t in a good mood that day, he wasn’t very well.

“If it was someone in a wheelchair they wouldn’t say ‘stand up’ to someone.”

She added that she has since checked with his hearing impairment team and she is not required to provide proof that they are exempt from wearing a mask.

Chantelle said that the experience has put her off returning to the shop.

She added: “I just felt bad for him because people were staring at him. I don’t like making a big issue out of his disability.”

In England, anyone above the age of 11 must wear face masks in all shops to stop the spread of coronavirus.

But there are a number of people who are exempt from wearing a face mask – including people who are speaking to or providing assistance to someone who relies on lip-reading, clear sound or facial expressions to communicate.

The Government website states: “This means that you do not need to seek advice or request a letter from a medical professional about your reason for not wearing a face covering.”

A spokesperson for Poundland said that no letter was asked for – the colleague asked to see a lanyard if one was not visible to understand if they needed a free mask.

They said: “All our colleague did was ask the adults, not the child, whether they should be wearing a mask.

“The conversation lasted 10 seconds and was with the adults only.

“We’re sorry they felt as though we shouldn’t have asked the adults whether they should be wearing a mask – and said so when they called the store yesterday.

We think most people will understand why our colleagues are being careful. They’re doing the best they can in difficult circumstances.