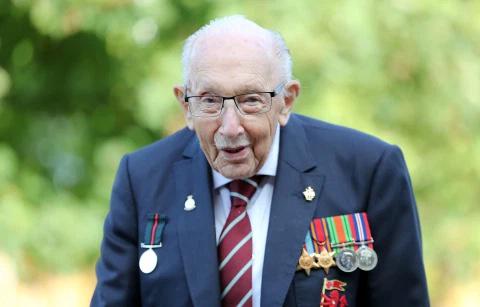 Piers Morgan revealed on today’s Good Morning Britain that Captain Tom Moore’s family have been ‘hurt’ by the sick online abuse they suffered in the lead up to his death.

Before and after he died, many trolls targeted the national treasure, who raised £32million for the NHS, for taking a trip of a lifetime to Barbados in December, with Piers fiercely defending his honour and hitting out at the ‘anonymous cretins’.

On today’s programme, Piers shared that impact the hurtful messages have had on Captain Tom’s family after speaking with the war veteran’s daughter, Hannah.

‘Hannah told me how it hurt them,’ he said. ‘It hurt them at a time of their darkest moment with their dad and grandad.

‘It just added a little bit more despair, misery and hurt onto what they were suffering as a family.’

Piers continued: ‘I hope you can live with yourselves, I really do because it was despicable and the very worst of this country is some of the stuff I read on Twitter and social media over the last few days.’

He implored: ‘We have to do something about this. The idea that people think it’s okay to abuse people like Captain Tom and his family after he raised £39million for this country for the NHS and they think they can abuse Marcus Rashford and black footballers.

‘They think they can do this with impunity and not suffer any consequences for it, and never think about the misery they inflict on their targets.

‘Well, I can tell you, you inflicted it on the Moore family in their darkest moment. You really did make it worse.’

Sir Tom had been taken to hospital on Sunday after being treated for pneumonia for some time and testing positive for coronavirus last week.

His family praised the care he had received from the NHS and said they had been able to spend time with him in his final hours.

In a statement, his daughters Hannah Ingram-Moore and Lucy Teixeira said: ‘We are so grateful that we were with him during the last hours of his life; Hannah, Benjie and Georgia by his bedside and Lucy on FaceTime.

‘We spent hours chatting to him, reminiscing about our childhood and our wonderful mother,’ they said. ‘We shared laughter and tears together.’