20 inches of snow set for Britain as yellow warnings issued 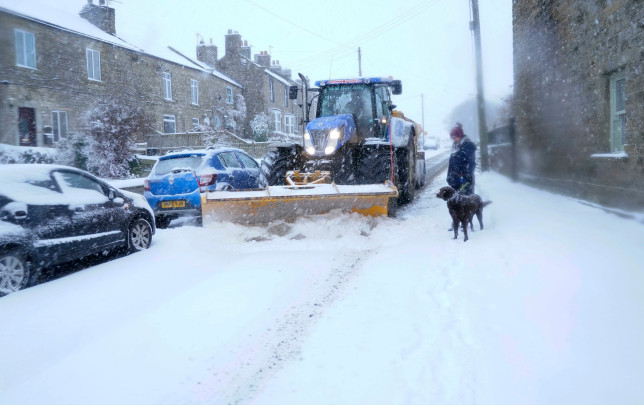 Nearly 20 inches of snow is set to hit parts of the country over the next few days.

Rural communities are at risk of being cut off by blizzards.

The Met Office has issued weather yellow warnings for today and the following five days, telling drivers to expect delays on the road due to stranded vehicles and passengers. Britons have also been warned of potential power cuts, and mobile phone networks and other services going down. Scotland is expected to bear the brunt of the bad weather, with more serious amber warnings issued for Friday and Saturday.

More than five inches of snow is expected in Scotland on Saturday, with as much as 20 inches on higher ground.

The Met Office warns people in these areas to expect severe public transport delays, long interruptions to power supplies and communities potentially being cut off for several days. Yellow warnings are also in place for much of northern England today and tomorrow, and then again on Saturday, with the heavy snow also making its way down the east coast, stopping just beyond Cambridge.

By Monday the snow warnings will no longer apply to northern Britain, but snow and ice is expected to persist in the East of England. Forecasters also warn of heavy rain in the North of England and Northern Ireland, with a risk of homes and businesses being flooded. Met Office Deputy Chief Meteorologist, Mark Sidaway, said: ‘Into the weekend snow will continue across much of Scotland, and is likely to increasingly fall to low levels before beginning to move south into northern and eastern England. ‘We are likely to see some very large accumulations across higher parts of Scotland especially, with strong winds leading to significant drifting and blizzard conditions at times. ‘Although amounts of snow across England are likely to be less, they could still cause some problems as we go into the weekend.’