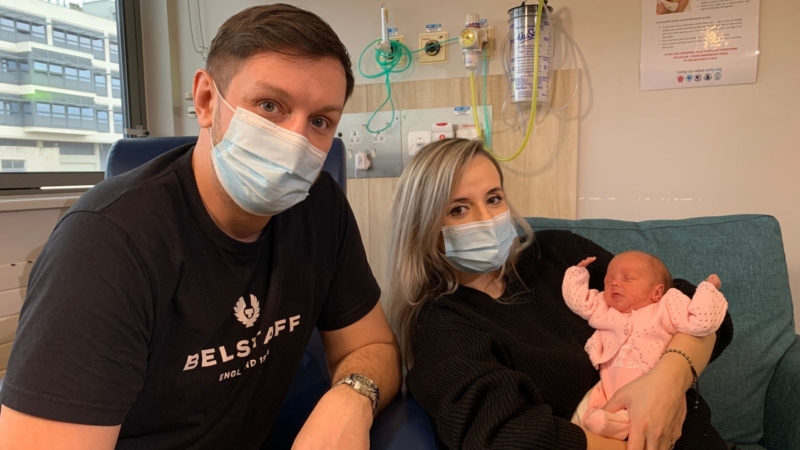 Cradling her tiny baby in her arms Elsa Larkins looks for all the world like any proud, adoring new mum.

She gazes down lovingly on her delicate daughter swaddled in a pink crochet knit blanket.

But this moment is one their family thought might never happen. Florence was delivered two months prematurely because her mother Elsa was critically ill with COVID-19.

Elsa was rushed to Kingston Hospital, southwest London, just after Christmas. She was seven months pregnant and so sick she thought she was going to die.

She said: “I remember telling one of the nurses I’m dying. And that upset her. She went home crying that night. It was hard for her.”

Elsa is only 34 years old and has no underlying health issues. But the baby inside her was pushing up on her lungs and compromising her breathing.

The difficult decision was taken to deliver the baby by emergency C section. The procedure was risky but doctors looking after Elsa felt they had no choice.

She said: “Elsa was unwell, she was needing more and more oxygen, which is not a good sign in a patient with COVID. As her oxygen requirements went up we knew she needed to go to ITU (intensive therapy unit) and to be ventilated.

“To actually to make a decision to deliver a baby early is a huge thing in obstetrics.”

Miss Shankar said Elsa’s case was unusual. The hospital had seen expectant mothers with COVID 19 but none had been as sick as Elsa.

She said: “A pregnant patient going into ITU is an extremely rare event, even in these COVID times, so she was quite unwell and we were really concerned about maternal health because we are putting the baby at risk by taking it out early.”

Elsa’s partner Tommy was told to prepare for the worst. He was warned he might lose his Elsa, the unborn baby or both.

“If I don’t get Elsa back I’ve got three girls to look after. You know all sorts of situations, scenarios, going around in your head that you would try and block out. It was horrible. I wouldn’t wish it on anyone.

“But to be here now is fantastic for us.”

Florence was delivered on 5 January. Weighing just 1.5kg (3lbs 5oz) she needed life support and was put on to a ventilator bigger than her own frail body.

Elsa was still critically ill and was returned to the intensive care unit, put into a coma and on to a ventilator.

She was brought round two weeks later. Her first thoughts were of her newborn baby Florence.

Elsa left the ICU and was moved to a maternity ward. It was the thought of seeing her baby again that drove her recovery.

“I’m always on my feet so the most difficult part was that I couldn’t get up. Seeing Florence is what gave me the strength I needed to get out of bed, nothing more I hate than being still somewhere,” she said.

Last week Elsa was able to see her daughter for the first time. It was an emotional, highly charged reunion between mother and newborn baby.

“It was incredible, seeing how little and fragile she is. There are no words. We didn’t plan it like this,” she told me.

This has been the most difficult 12 months for the Larkins family. Tommy lost his job at the beginning of the pandemic, Elsa’s two businesses have both had to shut because of lockdown. And she and baby Florence very nearly did not survive.

“She had a blood transfusion, hopefully, we can take her home soon and this thing can be over,” she said.

But they have come through the worst of it. Elsa is now at home recovering from her ordeal.

Baby Florence is still in hospital but grows stronger by the day.

There are a few more weeks of separation before this family can finally be together.