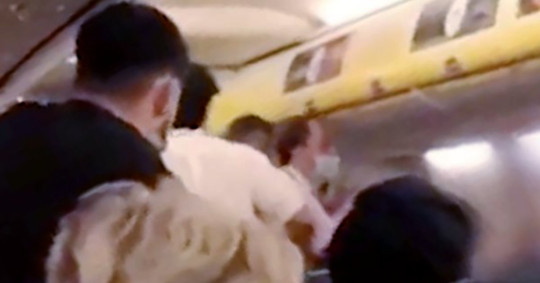 A drunk passenger launched an abusive rant at cabin crew on a Ryanair flight and headbutted them after refusing to wear a face mask.

Daniel Hendry, 24, caused chaos onboard the plane from Tenerife back to the UK after he drunk three-quarters of a bottle of vodka. After being asked to wear a mask, Hendry told staff: ‘F**k off, I’m going to punch you, going to smash your head in.’ He then headbutted a flight attendant before stroking another’s arm and trying to hug her and was arrested upon landing at Manchester Airport.

‘He was moved to the back of the plane but he continued to be drunk and confirmed he had consumed three-quarters of the bottle of vodka. ‘He then became abusive with staff saying: “F**k off, I’m going to punch you, going to smash your head in.” ‘He became aggressive with one of the cabin crew, Samuel Proietti, who was unable to hear some of the comments he was making due to his strong accent. ‘He then headbutted Mr Proiretti, not making full contact though as he moved his head out of the way but Hendry connected with the right side of his face, but caused no visible injury.’ She added Hendry continued to be abusive by ‘stroking a female member of the cabin crew on the arm’ before trying to hug her.

He then began pointing at a passenger who was filming him on his mobile phone. Ms Vallancee said: ‘The captain was in discussions about diverting the aircraft and made requests to various air traffic controllers to divert the plane, but due to the coronavirus pandemic, no airports were available to take the diverted plane. ‘The captain had to reluctantly continue with the flight but deliberately accelerated the plane to Manchester Airport, arriving 25 minutes ahead of schedule at the airport. ‘On arrival, he was arrested by police and caused damage to the police van by banging his head against the door and windows.’ He was said to have put both himself and ‘the plane full of people at risk’. Mitigating, defence solicitor Rebecca Wrack said: ‘He is 24, he had resided in Tenerife and was returning back to reside with his girlfriend who lives in Liverpool.

‘It was his intention on landing that he would get a taxi to her address and he would communicate with her when he got there. ‘Unfortunately, he was arrested and he fully accepts the prosecution case and doesn’t seek to undermine what has been said. ‘He falls on his sword and is remorseful. Unfortunately, he has little memory of what took place on that plane. ‘On hearing what has happened he is deeply remorseful.’

The court was told Hendry was due to appear through custody, but because he had travelled from abroad he was taken back to the police station where he appeared over a video link. He will now quarantine for two weeks as per the current Government Covid-19 guidelines. The case was adjourned to March 1 at Minshull Street Crown Court for sentencing and Hendry was granted bail.