Feb 1, 2021 Coronavirus Coach Driver 12 Months On And How He Became Vaccine Testing Hero 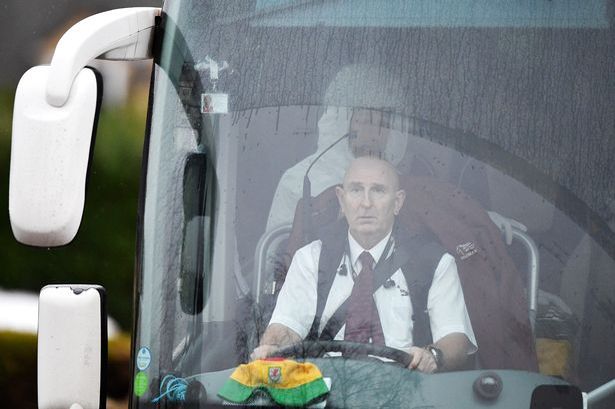 The coronavirus coach driver, Andy Simmons, who was drafted in 12 months ago to transport Brit’s returning from Wuhan to quarantine has revealed to Global247news exclusively how the last twelve months have been.

Simmons was the leading coach driver, who led passengers from Brize Norton to a quarantine centre on the Wirral as images flashed around the world of him at the front of the action fully unprotected with no PPE supplied.

Now Simmons from Reading although now residing in Cardiff has been inundated from messages from the public again as the anniversary of the transportation trips once again appeared in the media.

With many thousands wondering how he is 12 months on, Simmons agreed to speak with his favourite news station Global247news exclusively to let everyone know of his plight since.

“Well I can’t get a girlfriend – that’s for sure” he laughed as he started the interview.

” Seriously though it became pretty clear from the start that people were going to be living in fear of me, as we arrived in the Wirral at the time, we were chased through the streets, despite being clear of the virus, we were chased into Topshop and the manager had to call the police, whilst we had to escape out a back door, that’s when it first became apparent the public was going to treat me like a leper.

“In the end, I had no option to get out of the UK – everywhere I went people avoided me like the plague before the lockdown I would walk into a pub and the first thing the barman would say was ‘Is that you off the coach on the TV? – two pubs even refused to serve me, it was like as if I had two heads, so I headed out to Spain at first.

“I have a pal who lives a lot of the time in Fuengirola when not on business travels, he and his fiance had just come out of a full Spanish lockdown by this time and life was just restarting there, the problem though was the same, whilst the fella’s bought me pints, the women shied away still,” he said with a grin. ” Even my Tinder account died a death and one night a mate stuck me on Grinder for a laugh and even the men weren’t interested” he burst out laughing.

“Actually it wasn’t as bad as in Blighty, I could relax, at last, I met a top bloke who ran a Scottish bar on Fuengirola seafront, he would tell all the customers ‘ look who’s in’ and the holidaymakers treated me like a celebrity buying me drinks, one night though it all got a bit too much on the Long Island Teas, the bar owner, Mark Sutherland sells the most potent cocktails in the Luna Bar, I took advantage one night of my ‘celebrity status’ and ended up ‘sparked out on the seafront’ and that then became a turning point I think after my pal couldn’t get me back to my digs and slung me over the wall to sleep on the beach for the night”

Andy described how that was his turning point as he revealed: ” I woke up on the beach, with a thick head, as I sat there people started taking photo’s and before I knew it I was all over the Expat social media pages, they were slaughtering me and my actions, at that point I knew I had to do something to turn my life around, I couldn’t carry on like this, I’d spent too many drunken nights falling around Spanish bars.

“It had been a tough time being ‘johnny no mate’ – I’m a social bloke and when everybody avoids you it’s not a pleasant experience, but I knew I had to escape further and decide what to do, I said my goodbye’s to Spain and headed to Crete and Athens with an old pal who understood what I was going through and I talked and he listened as I droned on, I didn’t touch any booze for the 5 weeks we were there, walking the mountains and visiting the caves, it felt like a new life, nobody recognised me and I felt normal again, it was then I made the big decision – I became a COVID guinea pig to assist finding the vaccine.

” Oxford University said I was perfect for trials and I thought to myself, ‘ well if nobody in the UK wants to bother with me I may as well go into the lab

“I’d been in coaches full of Wuhan city residents so a few tests to find a vaccine to help others hopefully just seemed the right thing to do at the time, it was tough going at times, but as we now know, the vaccine was developed successfully and I like to think I played my part, anyway I have a story for the grandkids” he joked.

“After all the tests and viruses given to me medically followed by the test vaccinations – at least everyone knew I was clean as a whistle, I lost all my body hair, well I couldn’t lose any more off my head! – so I wasn’t that bothered really, my mate Steven text me to say ‘ You looked like Yul Bryner with your mask on, but when you took it off you looked like Ian Dowie’ that did make me laugh I have to admit, but the great feeling was my pals supported me right through it and never forgot me despite everything although I have to admit it was a lonely time in 2020.

“Although it had some blessings, I lost a lot of weight, and soon returned to Spain to see my pal there, I thanked him for pushing me over the wall and bringing me to my senses, that simple push snapped me out of feeling sorry for myself” he revealed.

“Life is good right now, I’m currently doing really well, I have had no side effects from all the testing, life, of course, is not normal for anyone right now but normality has returned for me in as far as people aren’t scared of me anymore – and at least I don’t have any chance of catching COVID or require a vaccine – although that still hasn’t improved my luck with the chicks!” he burst out laughing.

“Life is what you make it and we all just have to get on with it now” he ended.

Andy wished his proceeds for this interview to go to the Sir Captain Tom Appeal.